Since Version 12.40 was released, TSplus’ development team has been working on new improvements regarding the pillars of their Remote Desktop solution: quick deployment, easy administration and strong security. Read on for a quick overview of the new features included in TSplus 12.40 last update, published on July 12th.

TSplus Version 12.40 focuses on simplifying Management Tasks for Admins. With the merging of Connection Client and RemoteApp setups, the development team has brought an important improvement on this matter.

Another step into Simplifying RDP Administration

TSplus’ latest update makes another step in that direction with a new feature that will make App Publishing easier than ever. Administrators can now use the AdminTool to group apps into folders, then assign the full folder to a single user or a group in a click. This makes permissions management for multiple apps easier to manage and makes targeted deployment of groups of apps a breeze.

The folders are displayed the most optimized way according to the program used: Floating Panel, Application panel, Taskbar, Folder panel, Web portal and mobile apps… 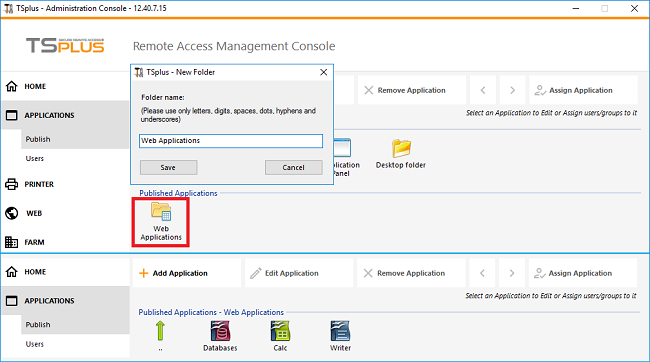 For years, Security has been at the core of TSplus’ deployment. In this purpose, RDS-Knight add-on has been developed to enhance both the prevention and protection against cyber attacks on RDS servers. With the version 12.40 update, TSplus goes further: the software now integrates one of the core features of their security solution. Operating as a native TSplus’ feature, the “Lockout” protection for Web Portal will please all users of the HTML5 Remote Client.

Lockout monitors failed web login attempts on the TSplus server. It logs logon process and temporarily prevents the session opening after the user entered wrong credentials several times. From the easy-to-use management console in the Web Tab of the AdminTool, Admins can check and edit the list of users blocked from the TSplus Web Portal. The thresholds defining the number of attempts and blocking period can be configured by the administrator. On RDS-Knight‘ side, every failed attempt from the same IP adress, regardless of the user name, produces a “Lockout” event listed in the Events’ log alongside the blocked Brute-force attacks. Once the Admin unblocks the user on TSplus, The Brute-Force Defender adds a second protection by monitoring attempts at the IP level. They can then be quickly unblocked and whitelisted with a simple right-click on the Event Log.

RDS-Knight latest 4.2 release is included as a trial version in TSplus! It greatly enhances the essential Working Hours protection with better performance and a new feature to make Permissions management a breeze!

For new TSplus users, or longtime users who have just recently discovered the new interface, the Marketing team has created a ‘Getting Started’ tutorial video to make this first introduction as smooth as possible (see video enclosed). The video is included in the latest update and will be displayed at the very first connection after installation. In 5 minutes, it illustrates the fast and easy setup process and explore some of the new workflow and feature improvements that TSplusVersion 12 offers.